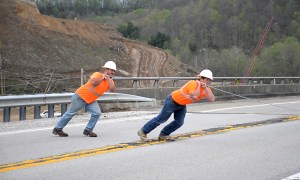 Crews who are relocating telephone lines will stop traffic periodically between mile points 60 and 61 on the Mountain Parkway on Tuesday, May 23. Drivers should expect four brief delays between 9 a.m. and 3 p.m. for up to 30 minutes each, though the stoppages typically won’t last more than 5 to 15 minutes.

Local law enforcement will assist with traffic control, and motorists should slow down and use caution around the work zones.

Construction workers are scheduled to set beams Friday, May 26, on the KY 205 bridge over State Fork Road.

Crews have stopped hauling material in Wolfe County to allow construction of six bridges, but they continue hauling materials on the project in Morgan County. The clearing and excavation work is off the parkway and not interfering with traffic flow.

However, drivers might occasionally find themselves stopped briefly near the Magoffin-Morgan county line as a safety precaution while crews are blasting.

Crews constructing this segment also continue to work on a ramp over Red River and expect to finish drilling for bridge supports in the coming weeks – with no traffic impact expected.

The Morgan County segment of the Mountain Parkway Expansion project covers 8.2 miles in Wolfe, Morgan and Magoffin counties. Improvements include widening the parkway to four lanes between mile points 56 and 65, improving and modernizing interchanges and eliminating an “S” curve near the Morgan/Magoffin county line.

Crews have finished pouring the deck of the new bridge at the KY 30 interchange. Next, they will begin preparing a road base ahead of paving. Travelers might also see gradework occurring, but none of this work is expected to affect traffic.

At the KY 7 interchange, workers are moving materials and dirt as they work on the bridge over Licking River. A road base and paving are expected in the coming months.

With students out for the summer, crews will begin working on an access road in front of Magoffin County High School. During construction, access to the school will be maintained.

Crews recently completed work on a retaining wall near the high school and are beginning construction of a second wall near the school.

Utility relocation continues, largely on the western end of the project area, near the US 460 intersection. Service lines will be installed, followed by a lift station and sewer.