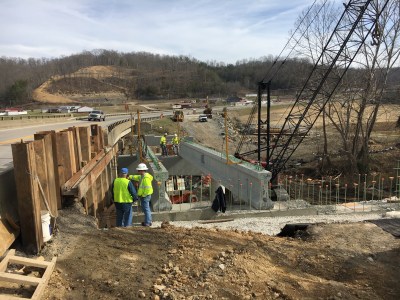 Crews have made significant progress in relocating utilities and building a bridge over Burning Fork on the western end of this 2.57-mile segment.

Workers recently placed six beams on the new bridge, and three more large beams will be added later this month.

A culvert on an access road on the north side of the project has been completed. Construction also continues on two large culverts on the east end of this section.

Clearing work has begun at various locations throughout this segment.

Construction is not expected to affect traffic, but the speed limit in the area has been reduced for the safety of workers and travelers.

Construction crews continue to mark and fence the right of way for the modernized KY 30 interchange.

Meanwhile, crews working on the KY 7 interchange have poured nearly 950 cubic yards of concrete in the past three weeks while building the bridge deck over the Licking River.

Clearing and excavation activities will resume in the spring.
The Magoffin County Central Segment of the Mountain Parkway Expansion runs from just west of mile point 70 to just east of mile point 75.

Crews have been moving dirt and clearing trees along the Magoffin-Morgan County line to prepare to widen this 8.2-mile section of the Mountain Parkway.

Utility relocation continues ahead of road construction, and workers will begin relocating water lines on Thursday, March 9. No traffic impacts are expected on the parkway. Traffic on KY 205 will be affected minimally, if at all.