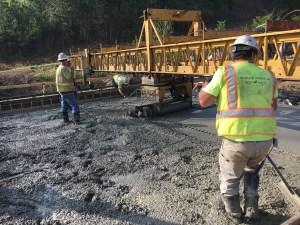 Significant progress is being made to construct a new bridge across Burning Fork – on the west end of Restaurant Row – while utility and clearing work continue throughout the 2.4-mile project area.

Later this week, a concrete deck is scheduled to be poured on the new bridge. Parkway traffic will be moved later this spring onto the new bridge, allowing for demolition of the existing structure. The new span will then be widened to accommodate four lanes of parkway traffic. Construction crews also are continuing work to extend a large culvert on the east end of the project.

Utility crews continue work to relocate gas, water and sewer lines along Restaurant Row, and that work will last until late this year.

Clearing work also continues, primarily on the west end of the project. In coming weeks, blasting of rock will begin near the Magoffin County Health Department to allow for an extension of a local access road that will connect with Parkway Drive.

With the arrival of spring, excavation work on the KY 30 interchange will increase. Drivers might encounter more trucks entering and exiting the highway, so they are advised to use caution. Crews are preparing to place a gravel base ahead of paving and are beginning to work on the decking for the bridge over KY 30.

On the KY 7 interchange, workers have poured barrier walls for the section of the bridge that has been completed.

Clearing and excavation continues near the Magoffin-Morgan County line to prepare to widen this 8.2-mile section of the Mountain Parkway. Travelers might encounter brief, periodic traffic stops because of blasting between mile points 56 and 60.

Construction to extend a culvert near Mile Point 59 has begun, and crews are excavating and placing fill material around Mile Point 57.