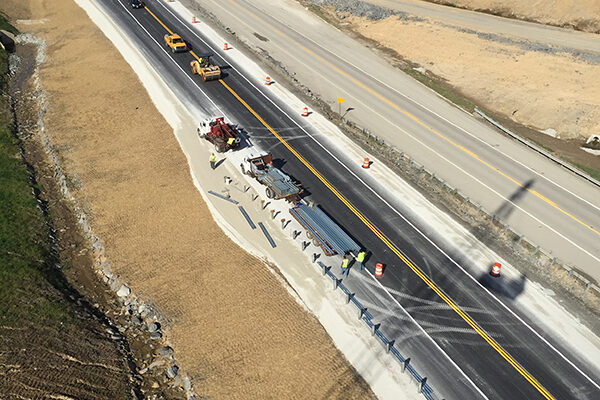 Gifford Road interchange
Significant construction and site work continues near Gifford Road, where a new interchange is being built. The interchange will provide new access to and from the Mountain Parkway and serve an industrial park being planned just to the north of the interchange.

Blasting continues near the interchange, and drivers should prepare for periodic traffic stoppages not lasting more than 20 minutes. Crews also are demolishing an existing bridge over the Middle Fork of the Licking River this week, but the work will have no impact on traffic.

During the next couple of weeks, crews will continue construction of a large culvert and excavation work before building up the base for this portion of the new Mountain Parkway roadway. Blasting will also continue, causing periodic traffic stoppages for no more than 20 minutes at a time.

Wolfe County
Engineers recently completed preliminary design work on an 11-mile section of the parkway in Wolfe County and have selected a preferred path for planned widening and improvements. The Wolfe County Segment runs from just east of Campton to the Lee City/West Liberty (KY 205) interchange.
A preliminary design calls for the parkway to be expanded primarily along the south side of the current roadway. Work to finalize the design plans is starting and expected to be completed next year. Property acquisition could begin as early as 2016, but specific schedules for property acquisition and construction depend on availability of funding from the Kentucky General Assembly.
KYTC representatives recently presented the latest details about two options for extending the parkway between Salyersville and Prestonsburg. The two options are:
• Extending the four-lane parkway along the current KY 114 corridor;
• Building a four-lane expressway in an area to the north
of KY 114.
A public meeting was held Nov. 19 to gather feedback from community members. Project leaders will evaluate the feedback, along with results of additional studies, and make a selection by early 2016.