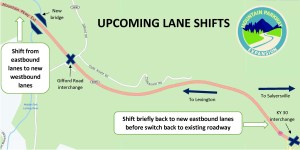 SALYERSVILLE, Ky. (August 3, 2016) – Crews working on the Mountain Parkway Expansion in Magoffin County will change traffic patterns this week to allow workers to advance the widening of the roadway near Salyersville.

Travelers should prepare for several lane switches between mile points 69 and 72 of the Mountain Parkway – just west of Salyersville. Speed limits have been reduced in the area, and signs will be posted to alert travelers of the changes.

In the area of the new Gifford Road interchange, both lanes of parkway traffic will shift to what will become the westbound lanes of the parkway from the eastbound side of the parkway. This change will move vehicles onto a new bridge that has been constructed over the Middle Fork of the Licking River.

Another shift will take place near the KY 30 interchange (Exit 72), where vehicles will be shifted to new pavement on what will become the eastbound lanes before shifting back to existing roadway.

“These lane switches allow crews to work safely and efficiently to bring us another step closer to a four-lane Mountain Parkway,” said Marshall Carrier, the Kentucky Transportation Cabinet’s project manager for the Mountain Parkway Expansion.

The switches are expected to occur Friday. Inclement weather could affect the schedule.

About the Mountain Parkway Expansion
The Mountain Parkway Expansion is a 46-mile transportation improvement project that will create a wider, safer connection between Eastern Kentucky and the rest of the Commonwealth. It is a key transportation project designed to close the only gap in a 400-mile, four-lane, high-speed corridor for commerce and mobility across Kentucky from Pikeville to Paducah. The project will widen 30 miles of the existing parkway to four lanes and extend the parkway by about 16 miles between Salyersville and Prestonsburg.

Project updates may also be found on Facebook (www.facebook.com/mtnparkway) and Twitter (@MtnParkway). A project office is open in Magoffin Plaza in Salyersville; call (606) 349-8160 for hours.