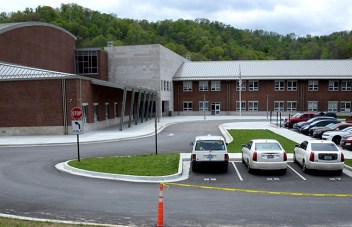 Feedback from community results in improved access for school

SALYERSVILLE, Ky. (February 13, 2018) – Parents, teachers and buses leaving Magoffin County High School will have another connection to the Mountain Parkway when road work near the school is completed.

After continued conversations with local leaders and school officials during construction of the Mountain Parkway Expansion, roadway designers are adding a new access point that will improve traffic flow in the area. The Kentucky Transportation Cabinet has updated its design for the Restaurant Row Segment of the project to include a right-turn-only option for traffic departing the school and heading east.

Once the Restaurant Row project is finished late next year, vehicles will access the high school using a frontage road being built between the school and the four-lane parkway. Vehicles traveling west from the school can enter the parkway at intersections along the local access road. Vehicles traveling east will be able to use the new entry point to merge directly onto the Mountain Parkway, heading toward Paintsville and Prestonsburg (shown on map below).

“I am pleased to have a transportation cabinet that is responsive to the citizens of Salyersville and make the practical adjustments to the highway expansion project,” said Sen. Brandon Smith, of Hazard. “This acceleration lane will allow our buses to merge safely into traffic.”

“The Mountain Parkway is a vital artery for Eastern Kentucky,” said Rep. John Blanton, of Salyersville. “It’s important that we make sure that as we improve safety and traffic flow on the parkway, we don’t disrupt the communities that rely on it to get to their jobs, schools and homes. This is yet another example of how we are building a better road to serve all of Eastern Kentucky.”

Vehicles traveling west from the school can enter the parkway at intersections along a new local access road. Vehicles traveling east will be able to use an acceleration lane to merge directly onto the Mountain Parkway.

The Mountain Parkway Expansion is a 46-mile transportation improvement project that will create a wider, safer connection between Eastern Kentucky and the rest of the Commonwealth. The project will widen 30 miles of the existing parkway from two lanes to four lanes, and will extend the parkway another 16 miles between Salyersville and Prestonsburg.

The 2.4-mile Restaurant Row Segment runs from just east of the current Mountain Parkway through a business district in Salyersville. It was funded in part by a $24 million federal TIGER grant from the U.S. Department of Transportation. The expansion project will widen the primary roadway to four lanes, limit entry points and expand a system of local access roads.