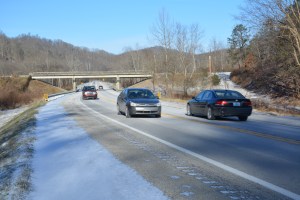 Construction to begin next week on Mountain Parkway Expansion

A new interchange to the Mountain Parkway will be added at Gifford Road. It will provide access to the planned Magoffin County Industrial Park.

SALYERSVILLE, Ky. (Jan. 20, 2015) – Crews are placing road signs this week to prepare for next week’s start of work on the Mountain Parkway Expansion, a highway improvement project designed to bring a wider, safer road to Eastern Kentucky.

Bizzack Construction LLC, of Lexington, Ky., was awarded a $19.4 million project last month by the Kentucky Transportation Cabinet to widen 1.4 miles of the parkway and create an interchange at Gifford Road, which is about five miles west of Salyersville.

Bizzack crews will begin to clear trees and prepare the area for the wider road and new parkway exit. When the new interchange is completed, it will provide direct access to the site for a planned Magoffin County Industrial Park.

The initial construction work should create minimal impacts on traffic. However, motorists should be aware that there will be a reduced speed limit in the work zone, and flag crews might be working in the area.

“This work marks an important step in bringing the Mountain Parkway Expansion to reality,” said Marshall Carrier, a KYTC engineer who is project manager for the Mountain Parkway Expansion. “We are starting our widening project near one of the most traveled sections of the parkway. The new interchange is scheduled to be completed in about two years.”

Combined, the three projects will widen 5.7 miles of the parkway to the west of Salyersville.

“This is a busy and vital stretch of the Mountain Parkway,” Carrier added. “Next year, we will start construction in the Restaurant Row section.

The Mountain Parkway Expansion is a 46-mile transportation improvement project that will create a wider, safer connection between Eastern Kentucky and the rest of the Commonwealth. It is a key transportation project designed to close the only gap in a 400-mile, four-lane, high-speed corridor for commerce and mobility across Kentucky from Pikeville to Paducah. The project will widen 30 miles of the existing parkway from two lanes to four lanes, and will extend the parkway another 16 miles by widening KY 114 from outside Salyersville to Prestonsburg.

In addition to the construction near Salyersville, other segments of the project are undergoing design, right of way, environmental and utility work to quickly bring as much of the project as possible to shovel-ready status.

The preliminary cost estimate for the project is $753 million, but teams of experts are working on value-engineering solutions to lower the cost to Kentucky taxpayers.