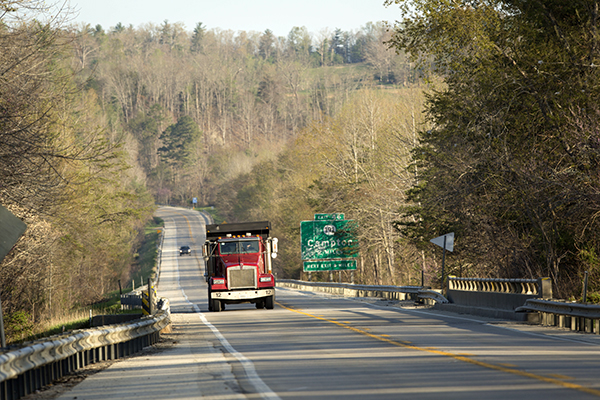 CAMPTON, Ky. (Sept. 23, 2014) – Citizens learned about two alternatives Tuesday night that are being considered for the planned widening and improvement of the Mountain Parkway in Wolfe County.
Nearly 100 citizens attended a meeting at Campton Elementary School, where engineers from the Kentucky Transportation Cabinet and its consultants sought feedback for their proposals to widen a nearly 11-mile segment of highway that runs from just east of Campton to the KY 205 interchange.
The two alternatives call for widening either to the north or south of the existing roadway to create a four-lane highway. Both alternatives include improving the existing Campton (KY 191) and Hazel Green (KY 1010) interchanges.
The proposed changes to the Campton interchange will significantly expand access to the parkway. Currently, only westbound traffic can exit the parkway at the interchange, and only eastbound traffic can enter the parkway.
Public comments continue
Citizens can continue to provide comments on these proposals through Oct. 7 by emailing info@MtnParkway.com. Public feedback and continuing engineering studies will lead to a final design. The goal is to improve safety and mobility while lessening the impact on adjacent properties and the environment, and containing costs.
“We are working quickly to make this expansion plan a reality and bring a better road to the people of Eastern Kentucky,” said Marshall Carrier, project manager for the Mountain Parkway Expansion. “We’re committed to making sure the public is aware of the options we’re considering to improve the parkway and have the opportunity to share their feedback.”
The Wolfe County Segment of the Mountain Parkway Expansion is currently in the preliminary design stages. Construction is not scheduled to begin for several years, following final design, right-of-way acquisition and utility work.
About the Mountain Parkway Expansion
The Mountain Parkway Expansion is a 46-mile transportation improvement project that will create a wider, safer connection between Eastern Kentucky and the rest of the Commonwealth. It is a key transportation project designed to close the only gap in a 400-mile, four-lane, high-speed corridor for commerce and mobility across Kentucky from Pikeville to Paducah. The project will widen 30 miles of the existing parkway from two lanes to four lanes, and will extend the parkway another 16 miles by widening KY 114 from outside Salyersville to Prestonsburg.
Construction on the parkway expansion will begin later this year in a segment west of Salyersville. Other segments of the project are undergoing design, right of way, environmental and utility work to quickly bring as much of the project as possible to shovel-ready status.
The preliminary cost estimate for the project is $753 million, but teams of experts are working on value-engineering solutions to lower the cost to Kentucky taxpayers.
For more information on the Mountain Parkway Expansion, visit www.MtnParkway.com or follow the project on Twitter (@MtnParkway) or on Facebook (www.facebook.com/mtnparkway).