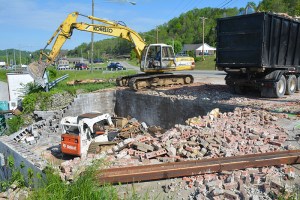 Restaurant Row
Pre-construction activities began last week along a 2.4 mile stretch of roadway in Salyersville. Contractors began demolition of a handful of structures that were purchased by the state and needed to be removed to make way for the first extension of the Mountain Parkway in a half century.

Pre-construction work will be ongoing through June.

Magoffin County
Clearing activities are continuing along a nearly 6-mile stretch of the Mountain Parkway to the west of Salyersville.

Blasting and excavation work will continue, and traffic may be stopped occasionally for up to 5 minutes at a time as a safety precaution during blasting. Excavation work is scheduled to be completed by next spring.

Traffic on KY 30 has been shifted from a temporary gravel lane back to pavement, and travel might be stopped 4-5 times daily for up to 15 minutes at a time because of blasting.

Gifford Road interchange
Crews will begin pouring concrete this week on the bridge that will carry westbound traffic on the Mountain Parkway over the Middle Fork of the Licking River. Traffic is not expected to be affected.

The new bridge runs parallel to a bridge that was completed last year and now carries both lanes of the Mountain Parkway.

Crews recently completed construction of a culvert under the old Mountain Parkway near the Gifford Road interchange and are preparing to backfill the area where westbound lanes will be added. They also are working on the storm sewer in the median for the westbound side.