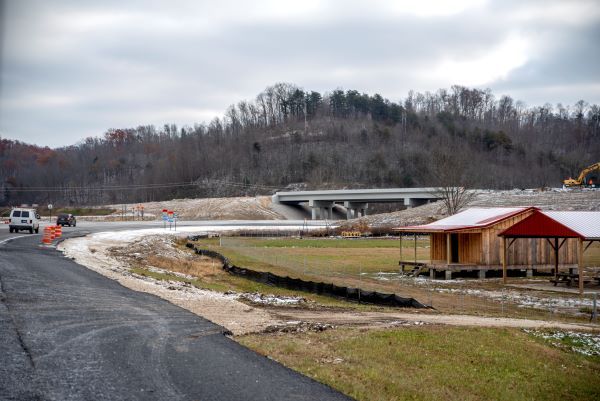 Traffic to Shift Over to New Eastbound Lanes

Drivers crossing the new eastbound bridge over 205 will continue on to the newly-paved eastbound lanes, eliminating S curve from previous route

SALYERSVILLE, Ky. (April 22, 2019) – On Tuesday, April 23rd, traffic going eastbound past the Lee City Exit in Eastern Wolfe County, near the 57.2 mile marker, will transition over onto newly-paved eastbound lanes. Where drivers on the Parkway crossing the eastbound bridge over 205 used to come off the bridge onto an S curve, diverting them briefly before connecting them back to the Mountain Parkway, they’ll now continue straight ahead, where traffic will be transferred over onto the newly-paved eastbound lanes. The switch will move both eastbound and westbound traffic onto to the new eastbound lanes, so that one lane of traffic will remain open in each direction during this phase of construction.

Continuing further east, drivers will travel approximately 2.2 miles on the new eastbound lanes, before they encounter an S curve. This curve will have drivers cross over a new median, and then cross back over, onto the older section of the Mountain Parkway, where they’ll continue their drive east on the older section of the Parkway. This diversion will occur near the 59.4 mile marker.

“There is an extensive amount of work being done in the Morgan and Eastern Wolfe counties right now, as crews work towards updating the Mountain Parkway, building several new, safer bridges and interchanges,” said Marshall Carrier, the Kentucky Transportation Cabinet’s project manager for the Mountain Parkway Expansion. “The crews at Helechawa have been hard at work paving the new Eastbound lanes, so that they can get traffic travelling over onto those new roads, and move onto the next phase of the project.”

After weeks spent paving and finalizing the new eastbound lanes through the spring season, transferring traffic over onto those eastbound lanes will allow crews to move onto the next task of beginning to build two new culverts on the east end of the project. These traffic changes will remain in place throughout the summer months.

For additional information, go to www.mtnparkway.com. Project updates may also be found on Facebook (www.facebook.com/mtnparkway) and Twitter (@MtnParkway). A project office is open in Magoffin Plaza in Salyersville; call (606) 349-8160 for hours.