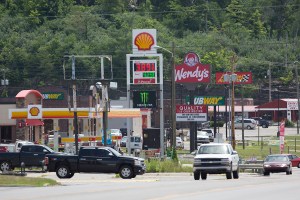 Preparations Pick Up for Major Construction along Salyersville’s Restaurant Row

SALYERSVILLE, Ky. (April 13, 2016) – Contractors for the Kentucky Transportation Cabinet are beginning to clear the path for the first extension of the Mountain Parkway in a half-century.

Crews working in Salyersville are completing pre-construction work needed to allow the project to begin this summer on Salyersville’s Restaurant Row.

Among the final pre-construction activities will be removal of about a half dozen structures that are in the planned path for parkway through Salyersville. The structures are located on property acquired by KYTC for the Mountain Parkway Expansion.

Local utility companies also will begin relocating overhead utility lines in the project area over the next several weeks.

Most of the pre-construction work will occur between now and the end of June. Several structures along Restaurant Row will be razed after roadway construction begins later this year.

“Residents of Salyersville and drivers passing through Restaurant Row are about to see an uptick in activity over the next few months as we prepare for construction later this year,” said Marshall Carrier, a Kentucky Transportation Cabinet engineer who is the project manager for the Mountain Parkway Expansion. “Over the last year and a half, the state has been acquiring the land needed for this major road improvement project. That process is nearly completed, and we are closing in on the construction phase of this project.”

The main roadway now has more than 80 access points from private drives and existing intersections. KYTC will work over the next two to three years to create a partially controlled parkway that will change the flow of traffic through Restaurant Row but ensure access to businesses, residences and other facilities.

The Road Ahead
After a contractor for the project is selected this summer, KYTC will share more details about the projected timing and location of planned construction. KYTC will work closely with the project team to reduce impacts to travelers and businesses operating along Restaurant Row, but some periodic disruptions to traffic and access are expected during the construction phase.

“We are working hard to reduce impacts and inform the community about the coming road project,” Carrier added. “We will continue our robust communications efforts to let businesses, organizations and travelers know what is happening so they can adjust during the construction phase.”

About the Mountain Parkway Expansion
The Mountain Parkway Expansion is a 46-mile transportation improvement project that will create a wider, safer connection between Eastern Kentucky and the rest of the Commonwealth. It is a key transportation project designed to close the only gap in a 400-mile, four-lane, high-speed corridor for commerce and mobility across Kentucky from Pikeville to Paducah. The project will widen 30 miles of the existing parkway from two lanes to four lanes, and will extend the parkway another 16 miles by widening KY 114 between Salyersville and Prestonsburg.