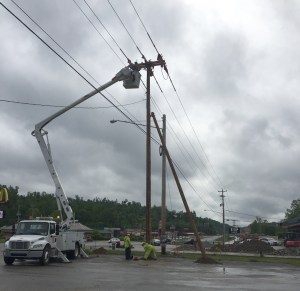 Utility work is continuing along this 2.4 mile stretch of roadway in Salyersville as crews prepare for construction on the Restaurant Row Segment later this summer.

Potential contractors recently met with KYTC representatives to discuss construction, and bids for the project are expected to be submitted soon.

Construction will last about three years as contractors widen the main road through Restaurant Row to four lanes and expand a system of frontage and backage roads to maintain local access.

Clearing and excavation activities are continuing along a nearly 6-mile stretch of the Mountain Parkway to the west of Salyersville.

Construction crews continue driving piling and pouring concrete for a new bridge over a creek for the modernized Salyersville interchange.  Workers also continue to move dirt and material to a waste area.

Blasting and excavation work will continue, and traffic may be stopped occasionally for up to 10 minutes at a time as a safety precaution during blasting. Excavation work is scheduled to be completed by next spring.

Crews have begun working on piers for the new bridge over KY 30 near mile point 72.

Clearing is complete, but workers continue to move dirt and material. The project includes modernizing and improving the KY 30 interchange as well as realigning and widening about 2½ miles of roadway.

Overnight work, which began in September 2015, has ended.

Crews are grading the area that will become the westbound lanes of the Mountain Parkway, preparing to put down crushed stone as a base for blacktop. Traffic is not expected to be affected for a few weeks.

Crews finished pouring barrier walls on a new bridge that will carry westbound traffic, and they are largely finished installing storm sewer pipes on the westbound side. The new bridge runs parallel to a bridge that was completed last year and now carries both lanes of the Mountain Parkway.

Westbound traffic is expected to be shifted to the new lanes later this year, which will create four lanes of traffic on parkway in this section.