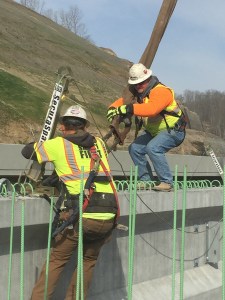 Magoffin County
Construction and clearing activities are continuing along a nearly 6-mile stretch of the Mountain Parkway to the west of Salyersville.

Traffic may be stopped occasionally for up to 5 minutes at a time as a safety precaution during blasting.

Excavation work also continues in preparation for additional construction, with a total of about 5 million yards of dirt to be moved. Excavation work is scheduled to be completed by spring 2017.

Drivers might be stopped 4-5 times daily for up to 15 minutes at a time because of blasting.

Crews have completed construction of a culvert under the old Mountain Parkway near the Gifford Road interchange and are preparing to backfill the area where westbound lanes will be added. They also are working on the storm sewer in the median for the westbound side.