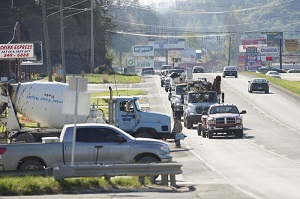 The Mountain Parkway in Salyersville, Ky., will be extended along what is commonly known as Restaurant Row with the help of a $24 million federal TIGER grant.

SALYERSVILLE, Ky. (Sept. 9, 2014) – The Mountain Parkway Expansion, the first major extension and widening of a crucial transportation link to Eastern Kentucky in a half century, today received approval of a $24 million federal TIGER grant that will speed construction of a crucial segment in Salyersville.

U.S. Rep. Harold “Hal” Rogers and Gov. Steve Beshear have jointly sought grant opportunities such as the TIGER grant as part of their combined efforts to improve Eastern Kentucky known as the SOAR Initiative (Shaping Our Appalachian Region). U.S. Transportation Secretary Anthony Foxx shared the news of the grant awards, which will be formally announced by USDOT this week.

“The widening and expansion of the Mountain Parkway in Eastern Kentucky is much more than a transportation project,” said Gov. Beshear. “It’s a transformation project for an Appalachian region that has been denied access to economic vitality because of inadequate infrastructure and limited mobility.”

“The work to improve eastern Kentucky is a marathon, but we are excited about the milestones that we continue to cross,” said Rep. Rogers. “There are many more projects on the horizon that will impact other counties in our region, and this announcement builds momentum around the opportunities that are growing through the grassroots efforts of SOAR.”

The grant from the federal Transportation Investment Generating Economic Recovery (TIGER) program will allow construction to begin two years ahead of schedule on a congested 2.4 mile segment that will extend the Mountain Parkway from its easternmost end at U.S. 460 and KY 114 in Salyersville.

The current segment is a bottleneck – with more than 80 entrances for restaurants, stores, medical offices and other properties. The expansion will create a safer, wider highway with controlled access points and back roads to maintain local access while improving a corridor for commercial and regional travel between eastern and central Kentucky.

Kentucky will cover the additional $15 million needed to complete the Salyersville segment, which has an estimated cost of $39 million. Right of way acquisition is scheduled to begin by year’s end and pre-construction work will begin next year. Construction is expected to be underway in the first half of 2016.

Widening the Road and Narrowing the Gap

The Mountain Parkway Expansion, proposed by Gov. Beshear and funded by this TIGER grant and the Kentucky General Assembly, will close the only gap in a 400-mile, four-lane, high-speed corridor for commerce and mobility across Kentucky from Pikeville to Paducah.

The 46-mile project will widen 30 miles of the existing parkway from two lanes to four lanes, and will extend the parkway another 16 miles by widening KY 114 from outside Salyersville to Prestonsburg.

Construction is expected to begin later this year on the first segment of the project, a parkway widening and interchange improvement project just west of Salyersville. The entire Mountain Parkway Expansion, which is expected to be completed in six to 10 years, has an estimated price tag of $753 million.