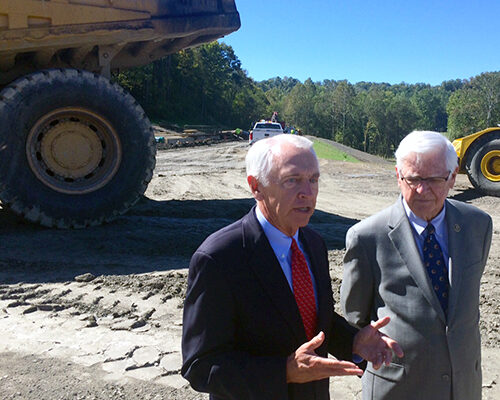 One-third of project will be started or shovel-ready in 2016, bringing opportunity to Eastern Kentucky

Kentucky Governor Steve Beshear was joined by Congressman Hal Rogers during a visit to a Mountain Parkway Expansion construction site.

SALYERSVILLE, Ky. (October 5, 2015) – Less than a year after Governor Steve Beshear unveiled the first Mountain Parkway Expansion sign to mark the beginning of road construction, more than one-third of the project is under construction or nearing shovel-ready status.

Beshear visited the first site of construction to see the progress that is transforming the parkway into a modern transportation corridor. He was joined by Congressman Hal Rogers and Jared Arnett, executive director of Shaping Our Appalachian Region (SOAR). The SOAR initiative was formed by Beshear and Rogers to overcome persistent challenges in Eastern Kentucky related to job training, health, education and economic development.

“Working in concert with SOAR, we are closing gaps in economic opportunities across our region and I’m pleased to see the expansion of the Mountain Parkway speeding ahead,” said Congressman Rogers. “The future looks bright in Eastern Kentucky as progress continues on the parkway and the I-Way, our broadband interstate.”

Governor Beshear, Congressman Rogers and other leaders visited at a project site just west of Salyersville, where construction workers are building a new interchange that will serve a planned industrial park. Kentucky Transportation Cabinet Secretary Mike Hancock and Mountain Parkway Expansion Project Manager Marshall Carrier led a tour of the site and provided a status report on the overall project.

“Governor Beshear and the legislature outlined an aggressive goal for this project when they approved the Road Plan last year, and we will deliver on their promise,” Hancock said. “Our Cabinet and our project team have made it a priority to complete this massive undertaking as quickly as possible. Our work is not just here – where construction activity is visible – but also in areas along the parkway where planning and engineering work are well underway.”

By next year, about 16 miles of roadway will be under construction or shovel-ready to allow for construction and property acquisition when funding is made available. The plan includes starting work next year in the Restaurant Row section of Salyersville – the busiest and most congested portion of the parkway. Construction work on this crucial segment of the project was sped by a $24 million federal TIGER grant.

Work could begin next summer to widen and improve about 8 miles of roadway spanning Wolfe, Morgan and Magoffin counties if the legislature provides funding in the next biennial budget.

As additional funds are made available, the remaining Mountain Parkway Expansion projects are in a position to start property acquisition and construction between 2017 and 2020.

“Everyone can see the impressive work that has started here to make this a better road for the citizens of Eastern Kentucky,” Beshear added. “But we must also envision the economic opportunities that are being created as we four-lane the entire parkway and construct a new corridor for commerce. We expect this transformational highway project to support new businesses and new industries that will bring more and better jobs to this region of the Commonwealth.”