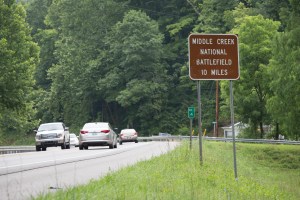 PRESTONSBURG, Ky. (May 18, 2015) – Based on positive feedback from a recent public meeting, the Kentucky Transportation Cabinet will carry forward its preliminary evaluation of a cross-country corridor for extending the Mountain Parkway from Salyersville to Prestonsburg.

More details will help KYTC better compare its two options for creating a four-lane, 14-mile extension of the Mountain Parkway: Widen along the existing corridor (KY 114) or build a new road along a cross-country corridor north of KY 114.

KY 114 is a two-lane state highway that runs between Salyersville and Prestonsburg. The Mountain Parkway Expansion team began looking at a cross-country alternative to widening the existing route because of the large number of homes and businesses along KY 114 that would be affected by the expansion.

Surveys from a public meeting attended by more than 300 people last month in Prestonsburg showed enough interest in the cross-country option to warrant further study.

At the meeting, the project team presented a general corridor that was identified for the potential cross-country route. The team also presented the estimated impacts and costs of extending the Mountain Parkway along both corridors.

KYTC already has detailed information about widening the existing KY 114 corridor from earlier studies. Conducting a similar level of study on the cross-country corridor will provide a better comparison of the two options.

“We value the feedback we received from Eastern Kentucky residents,” said Marshall Carrier, a KYTC engineer who is project manager for the Mountain Parkway Expansion. “The public indicated its belief that the cross-country route is a viable option that should be considered as we continue to expand and extend the Mountain Parkway. We’ve said throughout this process that we want to make sure we choose the route that best serves Eastern Kentucky for decades to come.”

Once the study is completed, the project team will seek additional feedback from the public.

The Mountain Parkway Expansion project will improve a transportation corridor that runs 46 miles between Campton and Prestonsburg. The project will widen 30 miles of the existing parkway from two lanes to four lanes and extend the parkway by about 16 miles.

When the entire project is completed in six to 10 years, it will close the only gap in a 400-mile, four-lane, high-speed corridor for commerce and mobility across Kentucky from Pikeville to Paducah.